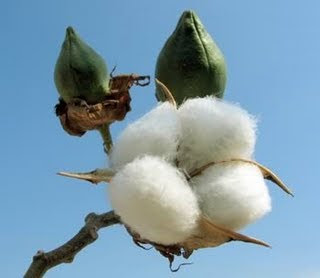 After cotton has been harvested, producers who use conventional tillage practices cut down and chop the cotton stalks. The next step is to turn the remaining residue underneath the soil surface. Producers who practice a style of farming called conservation tillage often choose to leave their stalks standing and leave the plant residue on the surface of the soil.

In the spring, farmers prepare for planting in several ways. Producers who plant using no-till or conservation tillage methods, use special equipment designed to plant the seed through the litter that covers the soil surface. Producers who employ conventional tillage practices, plow or “list” the land into rows forming firm seed-beds for planting. Producers in south Texas plant cotton as early as February. In Missouri and other northern parts of the Cotton Belt, they plant as late as June.

Seeding is done with mechanical planters which cover as many as 10 to 24 rows at a time. The planter opens a small trench or furrow in each row, drops in the right amount of seed, covers them and packs the earth on top of them. The seed is planted at uniform intervals in either small clumps (“hill-dropped”) or singularly (“drilled”). Machines called cultivators are used to uproot weeds and grassAbout two months after planting, flower buds called squares appear on the cotton plants. In another three weeks, the blossoms open. After three days, they wither and fall, leaving green pods which are called cotton bolls.

Inside the boll, which is shaped like a tiny football, moist fibers grow and push out from the newly formed seeds. As the boll ripens, it turns brown. The fibers continue to expand under the warm sun.Finally, they split the boll apart and the fluffy cotton bursts forth. It looks like white cotton candy.

Since hand labor is no longer used to harvest cotton, the crop is harvested by machines, either a picker or a stripper. Cotton picking machines have spindles that pick (twist) the seed cotton from the burrs that are attached to plants’ stems. Doffers then remove the seed cotton from the spindles and knock the seed cotton into the conveying system.Conventional cotton stripping machines use rollers equipped with alternating bats and brushes to knock the open bolls from the plants into a conveyor.
A second kind of stripper harvester uses a broadcast attachment that looks similar to a grain header on a combine. All harvesting systems use air to convey and elevate the seed cotton into a storage bin referred to as a basket. Once the basket is full, the stored seed cotton is dumped into a boll buggy, trailer or module builder.
Posted by Agri at 4:36 AM